IMPACT, BENEFIT, MEDIATE … highly successful projects with a familiar common denominator: Herman Stegehuis, senior scientist at Philips Healthcare and who, for the past decade, has been conspicuous in giving healthcare quite a bit of prominence in the ITEA project package. Here, at the Leiden University Medical Center, Herman takes time out to reflect on his experience in the ITEA Community. “I think it’s quite interesting,” Herman says, “that we are sitting here in the hospital. I’ve just come from a meeting between the surgeons, scientists and technology providers at which we discussed the status, progress and ongoing cooperation in efforts to improve clinical procedures and surgery. It is really rewarding to see how cooperation between the different players is shaping the way forward.” After April, however, Herman will be watching from the sidelines. He’ll be retiring after 35 years at Philips.

From analogue to digital 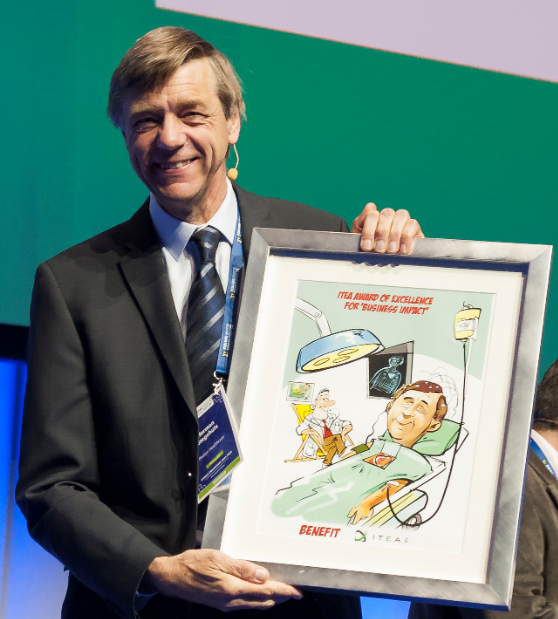 “I joined Philips in the mid-eighties, a couple of years after completing my degree in electronics at the University of Twente, where I specialised in medical image processing for my Master’s thesis. After that I worked for a couple of years at the university hospital in Utrecht on this same topic. At a time when the transition from analogue to digital really started to take off, our efforts concentrated on digitising analogue cine film images so that we could gain greater insight into the perfusion of the coronary arteries and the heart muscle. A lot of calibration was involved so we needed quite a bit of computer power. Well, for this purpose there were just a few suitable computers in the Netherlands, among them one at the University of Utrecht and two at Philips. So that is when I first came into contact with my future employer. I was offered a position, and so began my long association with Philips.”

“Of course, Philips was known more as the consumer electronics giant then but nowadays the focus is almost entirely on healthcare. Here the central question is still the same: how can we use technology to improve procedures and boost clinical efficiency? It’s the combination of new technological developments applied to new clinical procedures that has always attracted me. You see innovation from both sides. When you’re working in this domain, it’s great when you see the innovation actually getting into products and benefiting the domain for which it is intended. Although you also have to face up to the fact that other innovations don’t make it through. You need to have patience because it can take many years before you see the fruits of your labours being harvested, especially in the medical arena. Research is a job for people with staying power!”

Herman has seen tremendous strides over the past 35 years, none greater than the arrival of the digital age. “Just think back to when I started. For image sequences you had resolutions of 256 x 256 pixels at 8 bits per pixel. Now we are working with 2k x 3k and 16 bits per pixel. Storage capacity and processing speeds have increased incredibly. The changes have not only come in terms of the technology but also the actual environment in which a physician or surgeon works is much more complex than it used to be – with all kinds of procedures, workflows, data and technology. It’s become a collaborative environment of people, workflows and systems. People are living longer because more and better treatment is possible, but with the costs of healthcare rising, also the need for efficiency is growing. This is where advanced technologies have made a real difference. More people can receive better treatment than ever before.”

For the past ten years, ITEA has played an important role in Herman’s work, ever since he took on the MEDIATE project in 2010. “I had been used to managing projects within Philips but now I was confronted with a bit of a tower of Babel, if you like – different companies and institutes, different cultures, external partners, languages, areas of expertise, specific objectives … it was an interesting period, and I learned a lot. The mix often leads to unexpected ideas and innovations that you could not have conceived on your own. You get to know each other as time goes by and realise the benefits of this open collaborative dynamic. You may find yourself collaborating with a different partner than you had planned in the beginning. And then with surprising results.”

In this highly dynamic process within projects, Herman emphasises that the scope of the ITEA framework gives flexibility to realise changes. “As long as you stay within the general strategic objective of the project and show that there is good exploitation potential in the innovation. Communication with the ITEA team is good, especially with the reviewers who are very encouraging and positive towards well-founded proposals for change or come up with suggestions themselves. I have found this to be the case in the three projects that I have led (MEDIATE, BENEFIT and IMPACT).”

Fun at work and at play

And with retirement imminent, Herman is looking forward to enjoying the time that will become available to him. He looks back fondly on the past decade within the ITEA Community, one in which his projects have received various awards. “That’s something that came as an unexpected surprise. Of course, it is good to get recognition as a consortium and to see some consortium partners really be able to exploit the results in a commercial or scientific way. But in working together with all these different people from different backgrounds, I have been able to see how they innovate and have got to know them better. Especially during the time given to social events in the evenings. It’s been a lot of fun, both at work and at play. What more could you wish for?” What more indeed. And a nice sentiment to take on the next step … into retirement.

Innovation sparks – with an x!

Setting a world standard in gaming for special populations

A go-to-market acceleration platform for ICT

Where fantasy creates a new reality

Continuing to focus on customer orientation

A vision of standards and state of play