With five billion people likely to be living in cities by 2020, the urbanisation and immigration challenges posed to cities are becoming immense. City design is complex, and everything impacts everything else. IT can provide opportunities at affordable cost for cities with the promise of opportunity for smart support of urban development and the mitigation of risk through better planning and prediction. The enhancement of city planning by co-design requires simple access to different sources of information, the visualisation of relevant information for decision-making, the simulation of different scenarios, stakeholder communication support and combining static and dynamic data.

C³PO has found ways for city planners to consult citizens throughout the urban transformation process and thereby give citizens a better say in urban developments.

For centuries, many residents have come to know their cities, towns and villages like the back of their hands. They know the shortcuts, the hot spots and problem zones. However, before the age of social networks, city planners would first hire architects and contractors for new urban developments and improvements and, once the plans had been finalised and a 3D scale model produced, they would consult their voters. Today the ITEA C³PO project has found ways for city planners and designers to consult citizens throughout the urban transformation process and thereby give citizens a better say in urban developments. The aim of the project was to set up a common digital platform that connects all the tools for collaborative urban development. This includes available (open) data sources, 3D models and visualisations as well as opinions and insights from citizens and interest groups.

The consortium of 21 partners developed a cloud platform based on existing technologies and applications, as well as new products for the Smart Cities market. The project was strengthened by the participation of the cities of Brussels, Kortrijk, Kouvola, Oulu and the Municipality of Pendik (a district of Istanbul), which provided the perfect opportunity for trials. Trials in Finland and Turkey demonstrated the value of markerless Augmented Reality (AR) for new urbanisation areas and 3D mock-ups for table-top urban planning and visualisation. Virtual Reality (VR) was demonstrated in virtual tours in case studies in Oulu and Kouvola, while the new Pendik Municipality building provided a setting for selecting different options. The trials in the city of Brussels focused on accessibility and were used as proof of concept of the codesign process using data integration, and the different C³PO tools and methods. The cooperation with the city of Oulu and other stakeholders has continued after project completion to further develop AR services in city planning.

In addition to these trials, the different partners benefited in their own way from the C³PO project. For example, Noesis developed the Noesis Process Portal and Semantic Workflows, which are key components that complement every co-design activity from city co-design to aircraft and automotive. The portal and the underlying workflows allow the setup of a true collaborative multidisciplinary design process and optimisation, and have been successfully translated into advanced co-design features that are now embedded in the Noesis id8 collaboration platform, released in October 2020. Thanks to these enhanced collaborative capabilities, aerospace and automotive engineers from different teams worldwide benefit from the possibility to share engineering workflows, data and knowledge related to common design projects, enabling them to improve product performance by 10% or more and save on average over 30% in engineering time. 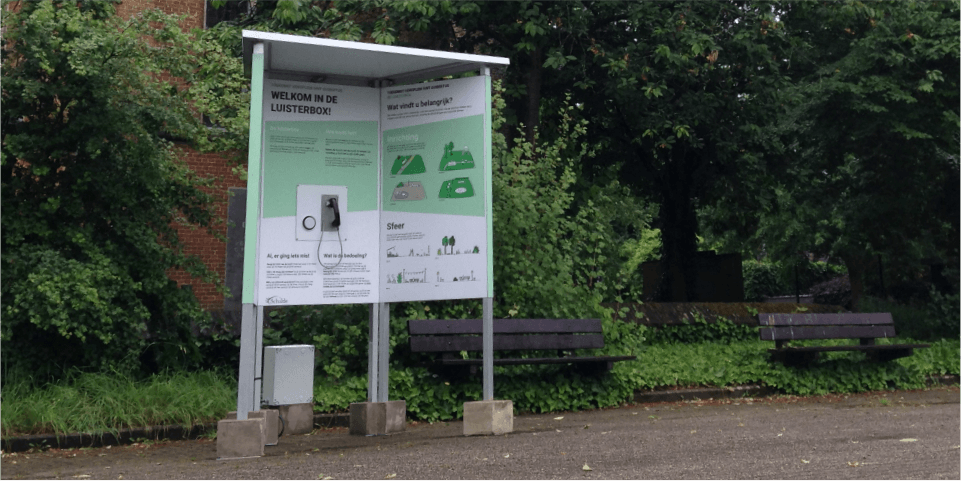 The visualisation component also played an important role in the C³PO platform. The Belgian design agency Studio Dott created a new form of citizen participation that appeals to – and reaches – the various target groups as broadly as possible. Studio Dott is commercialising a physical installation, the ‘Participation pavilion’ that can be placed anywhere by local authorities that want to collect a citizen-centred view on an urban design proposal. Even less tech-savvy citizens like the elderly can easily use the pavilion, in which responses to questions are recorded using audio. These recordings are anonymously processed using language analysis software. The current prototype has proven to improve citizen inclusion and is currently under further development. Having access to this new market is reflected in a projected revenue growth for Studio Dott of €1.7 m within 5 years. 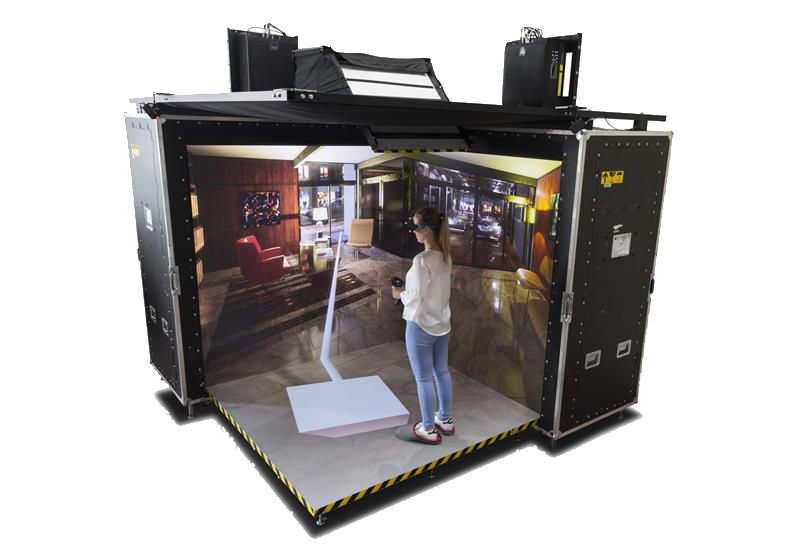 Belgian technology leader Barco created several demonstrators that enhance the City planning process. For example, the Transportable CAVE (TCAVE) is a professional collaborative VR solution - a mobile setting that offers companies better immersive virtual reality experiences. Citizens step inside the TCAVE wearing 3D glasses to see what a developed space would look like. This unique solution allows two persons inside the cave, each one looking at the 3D model from his or her point of view and negotiating what to modify on an urban design, for example. Previously, only one ‘master’ could interact with the model from a specific point of view; other participants had to try to follow the point of view of the master, which is a bit misleading. The quality and comfort of the collaboration has drastically increased through this world-first innovation. The TCAVE helps Barco to sell its ‘Group VR’ solutions to the market. Barco’s annual revenue on this type of product is about €20 m. In addition, it will also further help Barco in commercialising other solutions such as PowerWalls and CANVAS, the latter addressing a new market segment, the Architecture, Engineering and Construction (AEC) industry, where Barco expects annual growth of about 10% in the coming three to five years.

Belgian project partner Createlli helps cities, authorities and other organisations to co-create projects with citizens and stakeholders, using effective participation and co-creation. As a result of the C³PO project, they commercialised a participation platform and participation services. It has been used in over 80 projects so far in Belgium, Spain, France, the Netherlands and the UK, in cities like Brussels, Antwerp, Bilbao, Vitoria, Santander, Eindhoven and Edinburgh. The projects range from urban development and urban planning over infrastructure and mobility to climate planning and nature development. Thanks to the credibility of participation in this international collaborative project, they were able to expand internationally and to offer participation for those projects. This growth meant that they could hire three new people. Createlli now has a team of eight FTEs offering participation services.

Turkish company ERARGE developed a semantic framework that relies on the Urban Transformation and Transportation Ontology (UTTO). UTTO is integrated with the city data, including the vehicle and pedestrian flows, road maintenance data and city events which may affect the functionality of urban transportation infrastructure and its actual use. This approach enabled a data-driven and semantic traffic monitoring solution in Pendik to simulate how the city traffic may be affected by the urban transformation processes. ERARGE then collaborated with Bahcesehir University and applied Augmented and Virtual Reality to inform citizens about urban transformation plans for better citizen sensing, voting and personal opinion crawling. In parallel, ERARGE identified the privacy and security needs as the personal opinions and traffic flows are private information and the cities’ IT infrastructures can be vulnerable to cyberattacks. As a solution, ERARGE developed a hardware-based end-to-end cybersecurity tool to protect both city and personal data. All these studies have turned into three new H2020 projects, one new ITEA project (BIMy), the recruitment of five new junior engineers, more than 20 papers in top conferences and journals and one new product, namely PRIGM, a Hardware Security Module, which is now in a Common Criteria evaluation process.

Furthermore, the Turkish software company Mantis developed an outdoor screen that allows local authorities to showcase what people are saying on social media and start conversations with them at public places. This social media visualisation tool reflects the insights of campaigns to the public and to the campaign owner. It was used many times on different visualisation sources such as municipal billboards, advertisement screens, and presenters for analysis and tracking. Mantis also developed an ontology platform where the data coming from different sources of a smart city can be managed by a single common platform. Using this infrastructure, different components of the smart cities can be semantically associated, and data gathered can be easily queried and retrieved in a meaningful way. Later on, Mantis used this infrastructure to initiate a common project with municipalities in Turkey for railway systems. These solutions pushed up the annual revenue of Mantis by almost 15%. The know-how has also been used in other projects after C³PO.

Finally, the Finnish partners also developed strong results. For example, FCG Design and Engineering is a midsize consultancy company specialised in city planning and design & Smart City solutions. It created the MAPGETS platform for interactive urban planning and the RAKSITE solution for interactive construction site management. MAPGETS is a 3D Web Map Application Platform used for a wide range of applications, such as those designed for urban planning, asset management and process management. RAKSITE was developed for construction companies and cities. In 2020 it has been applied in Finland’s largest canal project, renovation of the Saimaa canal. C³PO was an important learning process for FCG in visualising information, stakeholder communication and knowledge management. The project also supported FCG’s expansion in three channels of its digital business: solution development, platform economy and SDK sharing. Between 2018-2022 this will result in an annual revenue growth of 5%. During C³PO, a computer scientist was hired who finalised his MSc in support of the project.

Playsign turns urban plans into immersive environments for better communication and co-design. It is an efficient tool for drafting, testing, communicating and creating future plans with citizens and other stakeholders. It is an environment that can be visited, played and experienced before any actual building takes place. Playsign Experience was used to integrate both BIM-based 3D models from Assar Architects and Createlli using their own web-based platform. They also enabled True Co-Design in area planning in Oulu. Playsign entered the market during C³PO and is today in use on the market as a platform for engaging people with the built environment. After C³PO it has been extended for real-time building applications, for example for air quality and energy use visualisations. The web technologies piloted in C³PO are used for both the phases of planning and building use, as in building life-cycle management. Thanks to the project, Playsign learned many key lessons about the businesses around city planning and built environment development and much about data models and interoperability. These remain key topics in the company’s ongoing development work today.

As shown, the value of the C³PO project for stakeholders is manifold. Data providers gain a data asset that is made available to ICT companies plus new business opportunities and increased data value through data integration, analysis and further visualisation. In turn, new business opportunities are generated for ICT companies by vertical integration with other applications, new markets and new space for the promotion of apps as well as enhanced application value to current customers able to access a wider set of data. Citizens benefit from better liveability and engagement in their city, gain new ways to participate in improving the place where they live and work, and have continuous access to up-to-date city development plans that they can influence. Cities, supported by enhanced data analysis procedures, profit from improved decision-making processes, mitigated urban development risk through better planning and prediction, and can actively involve their citizens.