Husqvarna, with its traditional lawn mowers and other garden equipment, is a familiar name in Europe. A lawn mower used to be a typical mechanical product with no software included at all, but over the last decade this product has been completely transformed and many households now own a robotic lawn mower that autonomously measures the length of the grass, navigates around obstacles and finds the borders without any difficulties, and even returns automatically to its loading dock after having completed its job. Forget the hard work and noise of Saturday mornings and enjoy a nice lawn at any moment of the year.

As in the case of Husqvarna, most product innovations today are enabled through software components, so it is no surprise that software is the primary means of competitive differentiation. Software plays a key role in the digitalisation of many products that hitherto were completely driven by electronics, so scaling software in a controlled and efficient way is crucial, and represents a major challenge for organisations. The required transformations are often driven by the technological evolution of products, systems or services as well as by how the business and the company are organised. In many instances, existing processes must be reshaped, and new best practices and tools incorporated. The challenge taken up by the ITEA project SCALARE, a joint effort of industry and academia from five countries, was how to support and enable organisations in scaling their software capability in a systematic, proactive way.

The SCALARE approach is unique in that it provides a holistic vision for scaling in three dimensions: software systems and services, processes and methods, and business and organisation. One of the key outcomes of SCALARE is the Scaling Management Framework (SMF), which organisations can use to assess their software development capability and plan their efforts to scale up that capability. Companies in every domain face this need to develop expertise in software development, including those domains that we do not traditionally consider to be software industries. Besides the Husqvarna example, many other domains rely increasingly on software to deliver their functionality including the automotive industry, with millions of lines of code running on up to 100 ECUs in modern cars. The SMF is an analytical tool that companies can use to assess where they are and define the steps to take to improve their software process.

The SMF and a rich set of case studies are reported in a practitioner-oriented book ‘Scaling a Software Business’, published end of November 2017. The book is freely available (https://www.springer.com/gp/book/9783319531151) as open access under a Creative Commons license. It provides a gentle introduction to how a variety of companies across several domains, including services and consultancy, are able to scale up their software development capability, which can be an inspiration for the whole European industry. 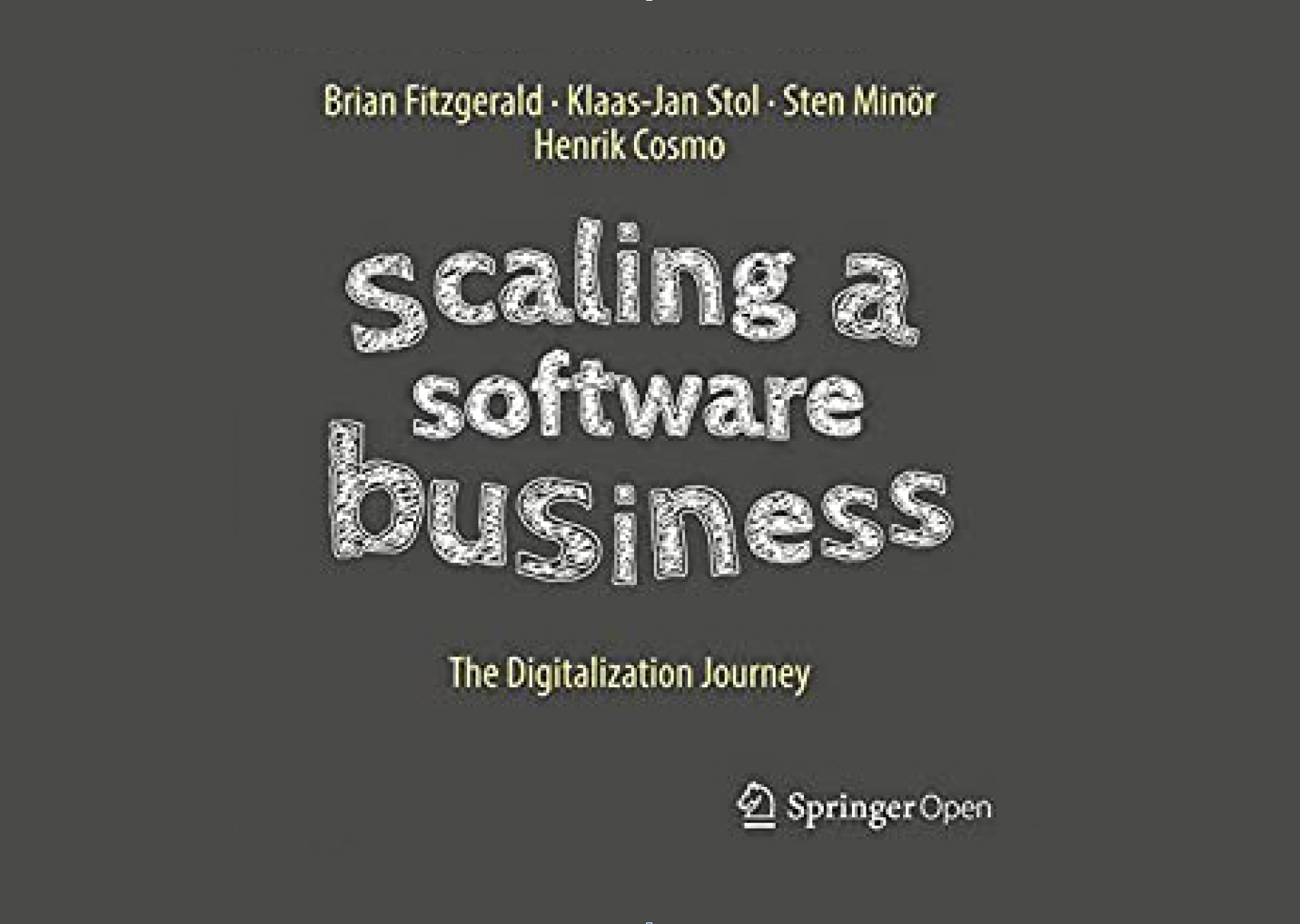 Building on the first book, which had been downloaded 16,000 times by mid 2020, the Swedish SCALARE project partners Addalot, Sony Mobile and Blekinge Institute of Technology published a second book in 2018 based on the scaling management framework from SCALARE, called ‘Principles for Industrial Open Source’. This book contains a detailed description of an Open Source program for industrials, and emphasises that the most innovative software is Open Source and that it is possible to simultaneously support Open Source while keeping parts of the code proprietary. The book presents Industrial Open Source, industry-proven and standardised patterns for how to manage a large-scale Open Source transformation. It can be used as a guide on your journey to successfully transforming your organisation. In particular the book explains:

The second SCALARE e-book can be downloaded from here.

The project partners were able to benefit from the SCALARE project in several ways. Husqvarna had been undergoing a shift from mechanical products to connected products with a service offering (electronics and software) but until 2016 the products had virtually no connectivity. With customers becoming increasingly demanding, the company was challenged to adjust to those high standards and implement customer centricity. Customer service has become a competitive trump card. Services are difficult to imitate and can thus be a competitor lock-out. SCALARE has enabled Husqvarna to make this transition, with its team of 4-5 software developers expanding to more than 160 people and enabling a 50% shorter time-to-market compared to 2016.

Other project results include a prototype of the open source pattern tool ASPIRE, a webbased documented case study with searchable metadata to easily identify solutions for common scenarios developed by Lero, the Irish Software Research Centre at the University of Limerick, and available under an open source BSD licence. This helps managers identify key practices when faced with scaling scenarios. The Inner Source topic – which refers to the adoption of Open Source practices and processes within an organisation – has attracted considerable attention from companies worldwide including Nokia, PayPal, SAP, and Robert Bosch. The research studies conducted as part of the SCALARE project also attracted considerable interest from companies globally. Researchers at the University of Limerick have since developed this work further, which led to a prestigious 4-year research grant from Science Foundation Ireland. Together with Open Source advocate Danese Cooper, who started the InnerSource Commons Community, one of the SCALARE researchers co-authored a book on Inner Source published by O’Reilly and freely available. The InnerSource Community has steadily grown since, with over 250 members representing a wide range of companies worldwide. Besides a considerable body of research studies that were published during the SCALARE project and a Special Issue of Softhouse’s magazine, six Masters students completed their theses on the SCALARE topics.

Furthermore, the Continuous Delivery (CD) assessment model was developed by Softhouse Consulting. It defines different maturity levels for various disciplines within the software development lifecycle, necessary to deliver software fast with good quality. With this maturity model, Softhouse Consulting already helped over 30 organisations - from SMEs to large enterprises - to understand where they stood in the software development lifecycle, and from there to define where they wanted to go. For SMEs, the model gives structure and for large enterprises it makes the processes more efficient, as it acts like a guiding layer in the middle, resulting in as much as 60% efficiency savings for some companies. Thanks to SCALARE, Softhouse Consulting found a new way to enter the business area and was able to recruit 6 additional senior consultants working with new consultancy services and achieved an increased revenue of over €400k per year, thanks to the possibility to reuse the founding of this model in the areas of IoT / Cloud services, AI, ML and Digitalisation. Finally, by offering the maturity model as a free download and distributing it widely, it also has a societal impact; with a low threshold, other organisations become inspired to take action, and the model becomes the reference.

Softhouse also developed the Scaling Agile Model for companies that want to start agile working on a larger scale. The OSS Maturity model is primarily a management communication tool being used at Sony Mobile to enable product value to be extracted from Open Source Communities and guide the development of an orchestrated ecosystem. The SCALARE project accelerated Sony Mobile’s own maturity in Open Source to the level that they now are seen as an industry authority both internally, within the Sony Group, as well as externally. Sony will continue to benefit from the software scaling strategies outlined in SCALARE as they evolve and move to new offerings “Beyond The Smartphone”, e.g. services based on Big Data, Cloud and IoT.

The Swedish consulting company Addalot also extended its consultancy services portfolio as Open Source and Servitisation consultancy services were introduced. This led to the recruitment of 1 senior consultant working with new consultancy services and an increased revenue of around €150k per year and growing. Addelot also leads a Swedish industry network for Open Source, Industrial Open Source Network (IOSN), under the auspices of the Swedish lobby organisation for software intensive companies and academia, Swedsoft. The members in IOSN include Ericsson, Volvo, Saab, Scania, Axis, Bosch and Sony Mobile.

With an estimated 10,000 people having been reached via numerous organised events, tutorials and keynotes, online videos, the project partners are helping to ‘arm’ the European industry for the digital transformation!