Drones, supercomputers, the rise of robotics and loads of smart apps

Drawing on the four editorial themes of sustainability, mobility, health and digital, the editors of Innovation Origins look back on 2020 with a summary of the most noteworthy news stories.

If ever there has been an innovation of tremendous importance in 2020, then it is the development of the corona vaccine. To a large extent, the SARS-CoV-2 pandemic has set the agenda. Even in the world of science and innovation. This is not necessarily such a bad thing. Based on the principle ‘never waste a good crisis’, all kinds of developments have been accelerated and even some new technologies were born. Innovation Origins looks back this month on the innovations and developments that the editorial staff has reported on over the past year. The theme today is ‘digital’.

One nice thing about new developments is that you can only determine the significance of something in retrospect. An invention that once made all the front pages turns out to be worth nothing later on. A few tiny developmental steps now, eventually turn out to have signaled the dawn of a technical revolution. And it really is a matter of how you look at things. Consumers aren’t all that interested in building a huge quantum computer. An app that could potentially save lives, on the other hand, is much more important to them.

The rise of robotics

But if there is one development in the field of digital techniques that is unstoppable, it is the rise of robotics. We are all going to encounter this within a few years.

Masi Mohammadi, professor of Smart Architectural Technologies at Eindhoven University of Technology (TU/e) thinks that a house will be a large robot in the future. “Our houses will take care of us then. A house will no longer be static but will adapt to our lifestyle and needs. It literally and figuratively moves with its occupants.”

The use of artificial intelligence in housing plays an important role in this. It allows a house to learn from the behavior of its occupants. “Imagine that a house can make itself a little bigger and a little smaller in certain situations. A larger living room or balcony, for example, can be useful when friends are visiting. The house can then expand a few centimeters. When the party is over, the house shrinks again,” Mohammadi explains. She thinks we are going to see the robotic houses in the streetscape by 2040 (Read the whole article here).

Robots are going to do dangerous tasks

We are bound to run into robots everywhere. Especially in places where it is dangerous for us humans. The fully autonomous robot ROVéo can independently carry out inspection rounds and choose its own routes in industrial facilities. It immediately raises the alarm as soon as it detects a problem. Moreover, it is capable of detecting any abnormalities in factory processes on its own.

You will not even have to develop a separate robot for industrial applications. The Avular company recently applied for a patent for the Prime. This is a black box with intelligent software measuring eight by eight centimeters wide and five centimeters high, which allows you to transform all kinds of machines into robots. For example, a sweeper machine. But also an automatic asparagus-sowing machine that relieves the laborious work of asparagus sowers. At the moment, someone is still needed to control that machine. Prime will eliminate the need for that.

Harvesting robots gained in importance when suddenly this summerthere was a severe shortage of seasonal workers due to the corona pandemic. As a result, the British company Fieldwork Robotics unexpectedly attracted a lot of attention. For several years now, the company has been working on robots with flexible arms that can compete with humans when it comes to picking fruit. The company started with just about the most difficult fruit there is: Raspberries. As founder Martin Stoelen says: “If a robot is able to pick fragile raspberries, it can pick anything.” Initial tests were successful. Now Fieldwork Robotics has entered into an agreement with the German technology giant Bosch to perfect the robot.

These types of applications are not limited to the industrial sector. A flying robot in the form of a drone from the Eindhoven student team Blue Jay, for instance, has been keeping an eye on healthcare institutions. Particularly in the evening and at weekends, when fewer staff members are present, an incipient fire is often not detected. Evacuating older, often physically incapacitated people also has to be done carefully and consequently takes more time. Their drone detects fires faster using special sensors, and alerts residents via light signals, starting the evacuation process wherever possible that way.

“A drone can act sooner and faster than healthcare staff or a care worker. That saves lives,” says Marieke Vermeulen of Blue Jay. “The drone flies autonomously through the building and in this way detects smoke faster than the average fire detector. In addition to an acoustic signal, the drone can also guide people with light.”

It is pretty clear. In more and more cases, smart systems watch over our safety or help save lives. Take Emergency Eye, for example. Thanks to this application, not only is it immediately apparent where an accident has taken place. The alarm center operator can also look directly through the camera of a smartphone to see what is going on and make decisions based on that information. You do not even need to speak the same language. The chat function in the system immediately recognizes which language is set on the smartphone and translates all comments and instructions from the switchboard operator in the system. The great thing about this is that no one needs to download a special app for it. It all works by using the alarm center’s software system. In Germany, 160 of the 250 or so alarm centers are now equipped with this system.

See where a problem is about to happen in the city

Another new tool for law enforcement and emergency services is the ITEA project ITEA-project PS-CRIMSON. This can be used to create a three-dimensional model of a city. Crime or undesirable incidents can be detected this way and people can people tracked and traced. Which also makes the work of the police a lot easier. Nowadays there are up to 60 monitoring screens in a single police control room that film real-time images around the city. Using this PS-CRIMSON, those sixty screens have been replaced by one single screen. It is even possible to walk virtually through a 3D model of the city. Cameras allow you to see what is going on. Microphones are also installed to listen in on any location so as to get an overall impression of the situation.

Another example of a life-saving system is the algorithm that makes it easier to find people who are lost or drowning at sea. This new algorithm, developed by the team with the help of tools from dynamic system theory and coastguard data, can predict where people or objects will drift to in the high seas.

Obviously, we will be dealing with robotic systems increasingly more as time goes on. Also in the area of education (robot helps children with the lessons). And in skills training (an app that gives feedback to psychology students on how to hold conversations). What about an app that acts as a ‘chatbot’ and that takes over the role of the general practitioner during the first primary care consultation? And once you do get a GP on the line, a system like ‘Deepspeech Analysis for Clinical Trial’, or VoiceWise, helps the doctor with their initial diagnosis. These systems can detect coronavirus and many other diseases by voice with the use of artificial intelligence.

You can access Helpr’s educational chatbot from your mobile phone. Plus, if we ever find ourselves sitting across from such a super-smart robot in the waiting room, we will also feel at ease thanks to the technology of Furhat Robotics. It develops social robots that are very humanoid in nature and capable of recognizing and understanding our speech, body language and facial expressions.

All these new developments in the field of augmented reality (AR) and artificial intelligence (AI) require ultra-fast supercomputers and broadband connections running at the speed of light. That, too, has come a lot closer in the past year. Take, for example, Alpine Quantum Technologie. It claims to be able to introduce a commercially usable quantum computer as early as 2022. While scientists from Utrecht (the Netherlands) and Zurich (Switzerland) have developed a technique that enables more efficient fiber optic connections for data transfer, as well as ultra-thin camera lenses and compact holograms featuring much sharper images.

Quantum technology is going to change the world and will have a profound impact on our economy. “What we now know about the possibilities of the technology is probably just the tip of the iceberg. Time will tell what the impact of this technology will be,” says René Pluis of Cisco Systems.

Searching for sheep or a parking spot near the airport

In addition to all these remarkable developments, a lot of innovations have been brought to the market that are mainly aimed at making life a bit more pleasant. One such example is an app to quickly locate the closest parking space to the airport. Or one that enables you to find out fast where the sheep are grazing on the Dutch meadows in Drenthe. Or how about Arion – a product from ATO-gear. This is a wafer-thin sole with pressure sensors that measures every movement of the foot. It was originally intended for runners so they can get instant feedback on their movements while running. This allows them to improve their technique and prevent injuries. But the soles can now also be used to map out the firmness and grip of the football pitch in the Johan Cruijff Arena in Amsterdam even more precisely. 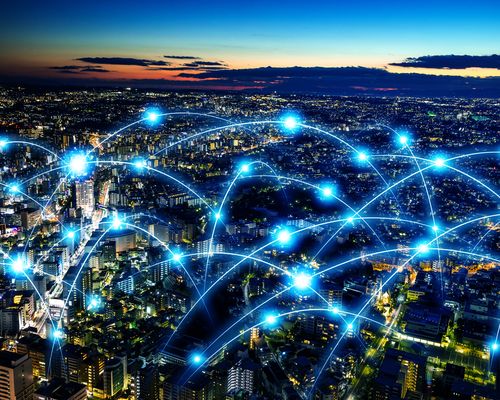