A unique 3D smart digital model has been developed to combine the different streams of data from cities on one common platform, and is the result of the ITEA project PS-CRIMSON, a collaboration of six academic and industry partners from the Netherlands and Canada. With this platform, public safety and disaster management can be improved, as pilot projects in Eindhoven and Vancouver have shown. Researchers from Eindhoven University of Technology developed AI image technology that can detect the location of incidents from an image and re-track the walking routes of people using multiple cameras. Today, PS-CRIMSON was awarded with the ITEA Award of Excellence, with special recognition in the categories of Exploitation and Unique business partnerships.

Nowadays, cities are digitalizing more of their services to facilitate data gathering on mobility, safety, and in relation to communication with citizens. However, authorities still need to tackle issues associated with information fragmentation caused by a lack of common platforms, toolsets and separated data streams per area. The PS-CRIMSON consortium delivers a platform that serves as a single-entry point for city representatives. This Smart City platform is designed to save time and money, and to also provide a single view of all data collected within a city environment, thus enabling representatives to act upon data in a more timely fashion. The focus of the platform is on the public safety and disaster management domains, where the platform’s benefits are extremely important.

The cities of Eindhoven and Vancouver participated in the initiative from the start, providing input on the design and implementation of the platform. This resulted in two technology demonstrators for two use cases, focusing on public safety and disaster management.

Currently, in the case of public safety, a team responsible for video-surveillance might need to monitor up to sixty live-screens in a control room. In addition, they receive dozens of calls from local citizens and officers regarding suspicious events. Thanks to the PS-CRIMSON platform, a team member could work with one single screen and, once logged in, virtually walk through a 3D model of the city.

A team of researchers from Eindhoven University of Technology led by Peter de With, Professor at the Video Coding and Architectures (VCA) group, developed AI image technology which was applied to study geo-localization and human re-identification. “With geo-localization, the system is able to automatically detect the location of an incident with an accuracy of 10 meters from a mobile picture sent to the police by searching through a photo database of the city,” explains De With.

Human re-identification allows the system to detect individuals in a certain area and connect the walking routes of individuals using cameras distributed throughout the city. “We call this rewind in time’,” says De With. “Walking routes can be made visible either forwards or backwards in time.”

A lot of privacy protection is built into the system reassures De With. “For our implementation, people’s faces are blurred. Current data rules allow for the storage of video files for no longer than 72 hours, and we have a very strict GPDR law in the Netherlands.” Fundamentally, the management of the system lies with the police and local authorities.

One team, one goal

The PS-CRIMSON partners uniquely complement each other in this collaboration. Atos and Esri Canada offer the integrated platform, ViNotion and Sorama are experts on sensoring, Esri Canada creates the digital twin city indoor modelling, Cyclomedia is responsible for the photo-realistic 3D texturing, and the Eindhoven University of Technology supports with innovative solutions in AI. Together, they cover the full value chain for a Smart City solution, integrating the different silos of data and technology together in one common platform.

Philippe Letellier, ITEA Vice-chairman: “The quality of the collaboration has been unique in the PS-CRIMSON project, taking advantage of the diversity of know-how and mastered technologies. This cooperative spirit was such that the partners have been able to extend it to commercial partnerships, which is always challenging. These partnerships have been successful in different worldwide calls for tenders. Another strong ITEA success story in the domain of smart city. Chapeau Bas to the complete team!” 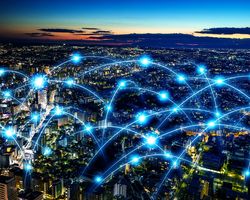